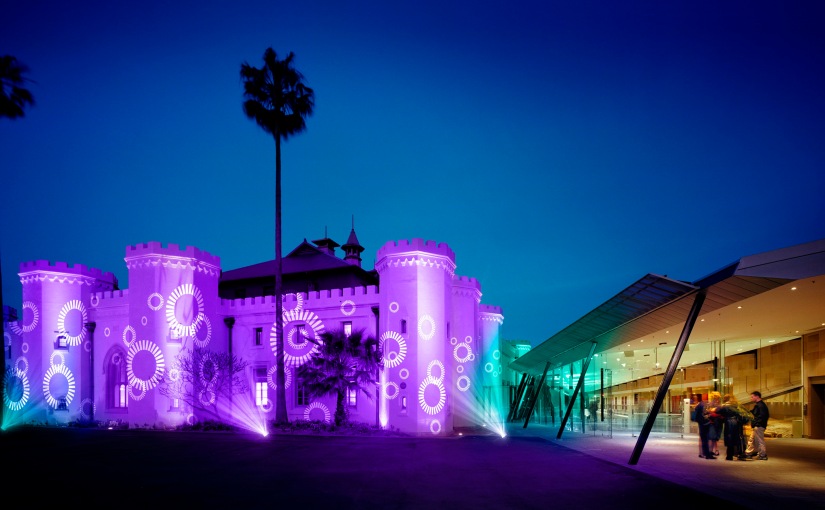 For the 1st time during Vivid Sydney, the iconic ‘music castle’ nestled on the edge of the Royal Botanic Gardens, the Sydney Conservatorium Of Music (the Con), will be a beacon of both spectacular light & live music as part of the opening weekend of Vivid Sydney, the world’s largest festival of light, music & ideas.

From a wind symphony concert, Symphonies Of Gaia, to a new music festival, Sound Gardens, the Con will stage live music across the 1st weekend of Vivid Sydney on the 28th & the 29th of May 2016.

The University Of Sydney’s Doctor Damien Ricketson, Chair Of Composition & Music Technology and Co-Director of Sound Gardens at the Con said “It will be a weekend music marathon that extends from popular, classical works in a Saturday night concert to jazz, electronic & experimental music in a Sunday afternoon festival.”

“Festival goers will see the breadth and depth of music & musicians coming out of the Con today. We will surprise & inspire visitors with what they see & hear!”

Vivid Music Curator, Stephen Ferris, said “Vivid Sydney is the perfect platform to showcase & celebrate the diversity of music talent this city has to offer. The Con plays an important role in fostering the rising stars of Australian music & I can’t wait for visitors and Sydneysiders to be able to come together for this special weekend of inspiring performances at one of our city’s most iconic venues.”

To launch the Vivid celebrations at the Con, the façade of the 100-year-old landmark building, with its castle-like turrets, will be illuminated in a wash of colour by TransGrid, lighting for 3 evenings from Friday the 27th of May to Sunday the 29th of May.

“Vivid’s lights paint Sydney in many colours & our support is focused on helping them all stay green. We’re delighted to be a Vivid Sydney Collaborator & to shine a light and bring Vivid colour to the façade of the Sydney Conservatorium Of Music during Vivid’s opening weekend.”

Guest artists, lecturers & emerging musicians from the University Of Sydney’s music school will form the unique line-up of music talent performing live over the weekend.

On Saturday night, the Sydney University Wind Orchestra will present Symphonies Of Gaia, conducted by Doctor Steven Capaldo. From Raider’s March (John Williams), the famous theme song of Raiders Of The Lost Ark, to a major finale work Symphonies Of Gaia (Jayce John Ogren), the concert program is a diverse repertoire of modern symphonic wind band music for all tastes.

On Sunday afternoon, a new 1-day music festival, Sound Gardens, curated by the Con’s Doctor Damien Ricketson, Craig Scott & Clint Bracknell, will be held across multiple venues at the Con.

In a genre-bending mash of vibrant new music, talented musicians from the Con’s composition, jazz & contemporary music tertiary courses will perform a series of live music sets that will run into the evening.

Headlining the festival are guest artists Natasha Anderson, who is the recipient of this year’s Peggy Glanville Hicks Residency, the exploratory Anthony Pateras & bassist Clayton Thomas, along with well-noted musicians & Con lecturers, Phil Slater & Simon Barker. They are joined by rock music group Secret Suburbs & other musician groups that are emerging from the Con.

Pendulum, an interactive installation made of glass jars and bells that trigger an electroacoustic soundscape & a performance by student Mimi Kind with her self-made instrument, the Rhythm Machine, will produce new experimental sounds at Sound Gardens.

For further details on the artists & music program at the Sydney Conservatorium Of Music, visit www.vividsydney.com.

Event details:
What: Vivid Music at the Con – Symphonies Of Gaia (Sydney University Wind Orchestra) & new Sound Gardens music festival
Where: Sydney Conservatorium Of Music, 1 Conservatorium Road, Sydney NSW 2000
When: Saturday the 28th of May (7:30pm) & Sunday the 29th of May (from 3pm)
Tickets: http://music.sydney.edu.au/event-listings