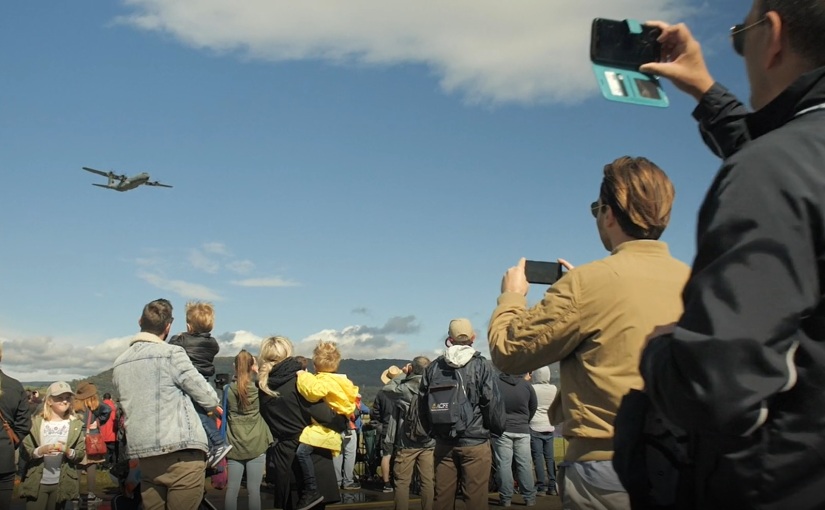 The 2nd biggest air show in Australia – Wings Over Illawarra – has been designated as the 4th and newest flagship Sydney Spectacular.

This means the flagship Sydney Spectaculars are as follows:

It also has static aircraft displays, an amusement ride carnival called The Captain’s Carnival and a classic car exhibition.

The day prior to the air show, the event holds a careers open day for schools for the 1st time ever.

The event is held at Shellharbour Airport in the Illawarra region of New South Wales, which is 90 kilometres (or about a 1.5 hour drive) south of Sydney.

The Airport is home to the main base of the Historic Aircraft Restoration Society (HARS) Museum, which is the permanent home of The City Of Canberra – a world-record holding Boeing 747-438 which did the longest non-stop un-refuelled delivery flight for an airliner in 1989. The Museum also has a smaller base in Parkes, which is about 300 kilometres (or an hour’s flight) west of Sydney.

The Museum’s aircraft sometimes appears in the flying program of Wings Over Illawarra but they all remain on the ground at the minimum as exhibits during the event. The City Of Canberra does not feature in the flying program as the runway is not designed for a Boeing 747-438 to take off on.

A future addition to the Museum is to be John Travolta’s Boeing 707-138B – the Jett Clipper Ella but the COVID-19 pandemic has held up the plane’s delivery to the Museum, which the actor described in his 2019 visit as the “only air museum I know in the world” that keeps old planes flying.

Wings Over Illawarra & the HARS Museum can be accessed by plane, private and commercial (the latter only from Brisbane & Melbourne), but for those not flying into the Airport (which will be most), it is recommended to come by train. Albion Park railway station is about 100 metres away from the event gates and is on the South Coast Line, which runs between eastern Sydney and the Shoalhaven. There is also a coach connection to the railway station from the Southern Highlands.

Sydney Spectaculars will be providing coverage of the 2022 edition of the event including the publication of the timed flying program which should happen around the 5th of November. Gates open at 9am each day with the air show beginning at 11am following an opening ceremony. The air show concludes at 4pm each day with gates closing at 5pm.

The 2022 edition will be held on the weekend of the 12th and 13th of November. Buy your tickets today!

Why this event you ask?

Back in 2020, it was the centenary of Qantas, Australia’s main airline and one of the oldest in the world & they put on a show over Sydney Harbour. The main feature of the event was a 100-minute scenic flight over Sydney and the Illawarra. The reason it travelled out of Sydney and south to the Illawarra was to acknowledge The City Of Canberra at Shellharbour Airport.

Shellharbour Airport was also the only airport along the flight’s route that had an annual air show as it’s main event. Sydney Harbour has aerobatic displays too – notably at Australia Day In Sydney but those displays are nothing compared to the length of the Wings Over Illawarra daily flying programs. They are also not the main event on the Harbour on event days – that it usually taken up by fireworks displays and/or concerts.

Aerobatic displays over Sydney Harbour in recent years have featured aircraft from the HARS Museum – most notably during the International Fleet Review in 2013 when a significant portion of the air display program came from the HARS Museum. That air display program also was very similar to a Wings Over Illawarra flying program (just a few hours shorter) but the flight path of the program was only along/around Sydney Harbour. It did not go to other locations.

Wings Over Illawarra began in 2007. It was run by the HARS Museum in co-ordination with the Airport’s owner – Shellharbour City Council and it grew year on year. By 2013, the event got so large that the HARS Museum gave the event management to a private company called Bright Events, who have run the event ever since, expanding it to an annual weekend air show. As of 2022, it is still growing.

It may not hold the record as the largest air show in Australia – that belongs to the bi-annual Australian International Air Show at Avalon Airport (near Melbourne, Victoria), which has been held since 1992 – but it is the 2nd largest and fastest growing with 19,000 visitors per public day in 2018 (compared to the 44,000 per public day at the Australian International Air Show in 2019).

To acknowledge it’s growth, proximity to Sydney, it’s association with other Sydney Harbour events, particularly the Qantas Centenary, and the fact it is the most major air show near Sydney, we have decided to designate Wings Over Illawarra as a flagship Sydney Spectacular.

Had the COVID-19 pandemic not occurred, this would have been announced a year ago.

What if I cannot attend the event?

The event, in recent years, has been live streamed but it should be noted that the previous edition was not live streamed so do not expect a live stream to appear on the ‘Watch LIVE’ page this year. However, if prior to the event, they announce or on the event weekend, publish a live stream, we will promote it.

There is another back-up though!

The HARS Museum has Tarmac Days on the weekend of the month’s 2nd Friday. On these days, you can board and sit in selected aircraft and they move their historic aircraft around the Airport, regularly conducting engine runs. If you are lucky, they may even fly the planes! As the program of Tarmac Days changes each month, check with the Museum prior to arrival to see if they are planning to fly a plane.

The HARS Museum also does flyovers around the Illawarra and Sydney basin on Australian & New Zealand Army Corps (ANZAC) Day, which for our international readers, is on the 25th of April and is Australia & New Zealand’s national day of remembrance. These flyovers usually occur between 7:30am & 1:30pm at the region’s main services (though the services’ flying program may vary).

In recent years, the HARS Museum has also done local flyovers on Australia Day but this may be just due to the COVID-19 pandemic halting the regular entertainment (A flyover can be seen by everyone without the need to crowd).

Wings Over Illawarra you are cleared to take off!