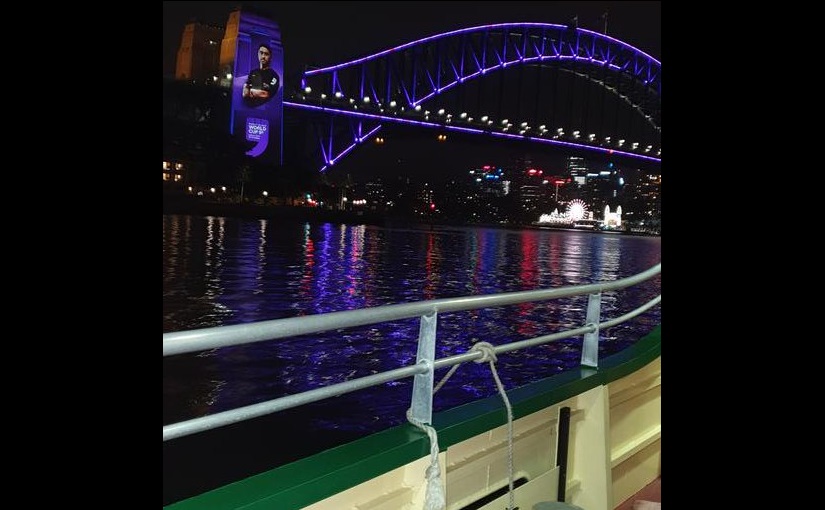 For the past 8 nights, the NRL Grand Final Week has been celebrated on the Sydney Harbour Bridge more than ever before.

The NRL has done projection mapping on both pylons for NRL Grand Final Week between 2011 & 2014 and only on the south-east pylon in 2010 & 2019. Mostly, these just consisted of celebratory images of the season past or of current players from the Grand Final teams.

Unexpectedly after a 4 year absence, these projections returned for 2019. The 2019 edition was larger than ever before incorporating the lighting used on the Sydney Harbour Bridge during Vivid Sydney with additional lighting used on the north-east pylon, which was also inadvertently beamed onto the roadway below the pylon for about half the past week.

Wednesday night saw a real-time unveiling of the 2019 Dally M winners being projected. This was just simultaneous to the actual announcement.

Saturday night, after the Grand Final’s conclusion saw a projection of the Sydney Roosters lifting the Provan-Summons Trophy (obviously from last year’s win) on the Sydney Harbour Bridge, indicating to Sydney who won the match. The Bridge was lit in the team’s colours too.

Sunday night, however, saw 4 different projections used on rotation. Projections were on rotation for most of the past week, mainly of NRL players, moments and celebratory messages. We can confirm one last night was of the Rugby League World Cup 9’s logo, which was posted on Twitter by a user:

The logo seems to have the event’s sponsor removed from the projection, which would have been inside the ‘9’ at the top. 3 words underneath ‘World Cup 9’s’ can’t be interpreted but the actual logo only has 2 words ‘Sydney 2019’.

The Rugby League World Cup 9’s is an event unrelated to the current event being held, NRL Grand Final Week. The only relation is that it is the same sport. The tournament does not begin for 10 days, indicating this was acting as a promotion for a future event – the purpose of an advertisement. It is also the 1st edition of the event ever, so there is no chance this is of being city/state/national/global significance, apart from having hosting rights and the fact NSW is a rugby league fanbase.

2 other projections shown last night we believe celebrated the recent Grand Finals and the Sydney Roosters’ win. The other projection we can’t confirm the content of (If you know, please contact us).

It should be noted Peter V’Landys, CEO of Racing NSW (and at the time of The Everest Barrier Draw projection show last year), recently became Chairman-elect of the Australian Rugby League Commission and these NRL Grand Final Week projections are being done in conjunction with Destination NSW, who also did the recent Greater Western Sydney Giants lighting, though for some reason, did not add projections for that occasion.

Todd Greenburg, in a press conference after the projections were turned on for the 1st time last Monday night, referring to Cooper Cronk’s image being projected, said how that player’s “brand is sitting on the iconic Sydney Harbour Bridge” and that “it demonstrates, again, the power of the game. It demonstrates the power our players have”.

As we pointed out at the article’s start, they have – numerous times. We wonder why he said that?

All this could be to justify the upcoming The Everest Barrier Draw projection show being done.

While some may consider The Everest Barrier Draw projection shows to also be an advertisement, whilst it does promote the event to a degree, it is being used for an active event that is being held at the time of the projection show.

We pointed out last week that logos have been used before on the Sydney Harbour Bridge, mainly to show they are sponsors of Sydney NYE on the night of the event:

Sydney NYE does do projections on the pylons other than of sponsors on that night – there is the countdown, community messages, safety messages as well as occasional event theming. So there is a precedent for logos being used. However, the Rugby League World 9’s is not a sponsor of NRL Grand Final Week or it’s projections.

The Rugby League World Cup 9’s projection seems intended as an advertisement hidden amongst the other NRL Grand Final Week projections. We can’t recall any similar projections being done (heaps of projections have been done but due to poor notification of them, our history of them is a bit scattered all over the place) apart from the Sydney NYE corporate branding but given the context of Sydney NYE, that seems fine particularly as it allows that event to be held. The Rugby League World Cup 9’s projection does not seem to match that context or any other previous projection show that we can recall (though we are happy to be corrected if someone can recall a similarly done projection show in the past 11 years – projection mapping on the Sydney Harbour Bridge pylons began in 2008).

This all comes about 1 year after The Everest Barrier Draw caused controversy when news reports appeared that Racing NSW were displeased at the Sydney Opera House Trust’s decision to reject a projection show for a barrier draw, particularly when it concluded in a clear advertisement:

The advertisement was later removed and the projection show amended. However, a fiery ‘interview’ between broadcaster Alan Jones and the Sydney Opera House Trust CEO caused headlines particularly when it concluded with Alan Jones saying he will speak to Gladys Berejiklian, Premier Of NSW, in “5, 3 minutes”. Her decision to proceed with the projection show amended was hastenily made 9 hours later. This, along with the general content of the projection show, caused protests and petitions and generated worldwide headlines along with a warning from UNESCO that it puts the Opera House’s Word Heritage status at risk.

With an announcement of a similar show but a Sydney Harbour Bridge pylon due to be made sometime this week (with the show being held next Tuesday night), there is an expectation protests may arise again though the scale and controversy may not be as large as last year.

As with the proposed The Everest Barrier Draw projection show, the NRL Grand Final Week projections would have needed approval from Roads & Maritime Services as well as Heritage NSW. We now wonder, with the latter, how did the Rugby League World Cup 9’s projection get approval?

So, what do you think? Is the Rugby League World Cup 9’s projection image on the Sydney Harbour Bridge south-east pylon an advertisement? Tell us what you think in our polls below:

Note: Updated on 8th October to point out Peter V’landys is Chairman-elect of the Australian Rugby League Commission. He becomes Chairman on October 30.