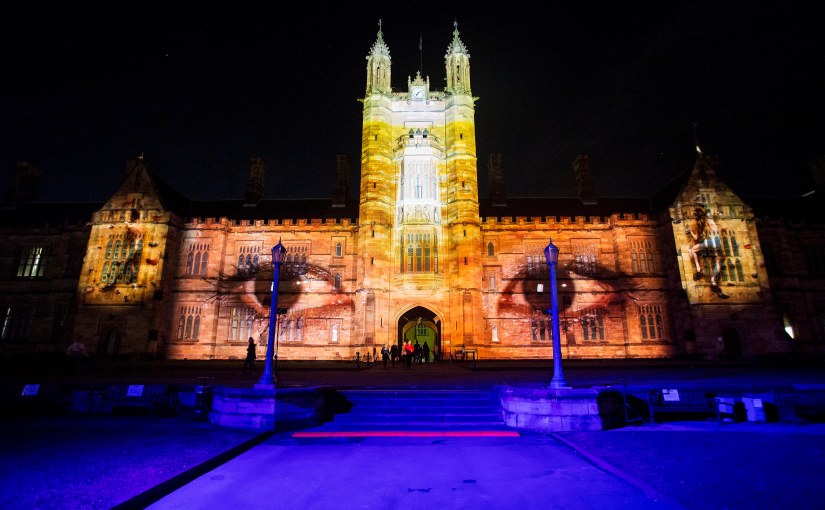 The University of Sydney has been transformed into a glittering canvas of light, live performance and inspiring ideas as Vivid Sydney continues to amaze visitors with the official launch of Vivid Path To The Future.

NSW Minister for Trade, Tourism and Major Events Stuart Ayres said: “This evening I was delighted to join University of Sydney Vice-Chancellor and Principal Dr Michael Spence to launch this year’s Vivid Path To The Future program, which has returned with expanded programming touching on Vivid’s three creative pillars – light, music and ideas.”

“Vivid Sydney is where art, technology and commerce intersect, and with exceptional academic staff and students across each of these three areas, it is only natural that Australia’s oldest university plays a big role in this year’s festival and I encourage everyone to explore this exciting Vivid Sydney precinct,” he said.

Throughout the next week, the university’s Quadrangle façade will come alive with vibrant 3D–mapped light projections, created by more than 40 local and international artists, including staff, students and local collaborators. An impressive light walk features along the main promenade and the Sea of Hands, an interactive installation, will grow throughout the festival.

In addition to the light installations and projections, the University’s program features a series of music performances at the Seymour Centre, Musify and Gamify – home for the most innovative new ideas in Australian music.

“The University of Sydney is thrilled to be part of Vivid for a second year. This is a wonderful opportunity for our talented staff and students to collaborate and showcase new ideas and directions in art, music and technology. The University looks forward to welcoming and inspiring the Sydney community with a dynamic program of lights, music and ideas over the next seven days,” said Dr Michael Spence.

Vivid Sydney is owned and managed by the NSW Government’s tourism and major events agency, Destination NSW. The largest event of its kind in the world, Vivid Sydney runs for 18 nights from Friday 22 May until Monday 8 June.

Vivid Path To The Future will run from 25–31 May. To see the program and to plan your trip to Vivid Sydney visit www.vividsydney.com.