Australia Day In Sydney 2020: AddressJanuary 21st, 2020
The 2020 Australia Day Address is now being delivered by Grace Brennan, founder of the #buyfromthebush social media campaign to support rural communities facing drought. You can watch it by clicking 'Watch LIVE' above or on Sky News Extra on Foxtel Channel 604. 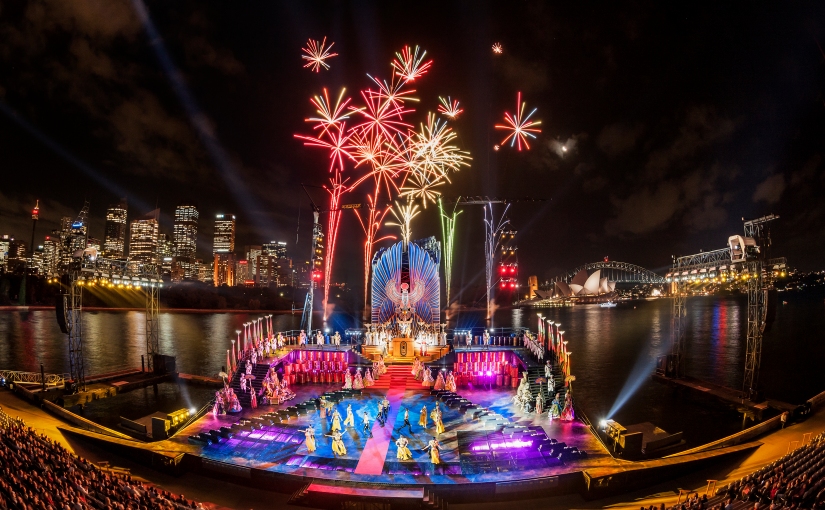 Opera Australia’s 2015 Handa Opera on Sydney Harbour (HOSH) production has been declared an overwhelming success for the company, firmly cementing its’ place on Sydney’s annual cultural calendar as an iconic, ‘must-see’ signature event.

Now in its’ fourth year, Aida was on track to break all box office records even before Opening Night, having sold more tickets at that point than the entire 2014 season.

With HOSH’s reputation as a world-class production growing each year, Sydneysiders, interstate and international visitors flocked to the event like never before. The result was more than 55,000 seats sold, representing a box office increase of 45%.

“This year, nearly 20,000 tickets were sold to people outside of Sydney – an increase of around 75 per cent on last year – contributing significantly to the NSW visitor economy. The NSW Government is very proud to be partnering with Opera Australia until at least 2017 through our tourism and major events agency Destination NSW to bring this event to Sydney Harbour,” he said.

Opera Australia’s Artistic Director, Lyndon Terracini, said he is thrilled to see his vision reach such a pinnacle both creatively and commercially.

“It’s been so incredibly satisfying to witness the enthusiasm and the critical acclaim this spectacular production has generated. Each year, it manages to exceed our expectations. And extending the season in 2015 allowed us to welcome more people to experience this unforgettable performance in one of the most beautiful settings in the world,” said Terracini.

“I must congratulate director, Gale Edwards, and her creative team including set and costume designer, Mark Thompson, who together delivered a most memorable stage design, giving us an extraordinary addition to the stunning Sydney skyline with our Queen Nefertiti sculpture.”

“And to all the magnificent singers, musicians, dancers and actors from Australia and around the world, heartfelt thanks for embracing HOSH and delivering us such amazing and memorable performances,” he said.

The event’s major benefactor Dr Haruhisa Handa attended a performance of HOSH for the first time in its four-year history, along with special guests Australian Prime Minister Tony Abbott and Mrs Abbott.

“It has been incredibly satisfying to see a performance for the first time. To see first-hand how much work has gone into it, the costumes, the set, the dining areas. And to see so many people coming to enjoy such a wonderful production with some of the finest singers and musicians in the world on this magnificent stage with this incredible backdrop. I am so proud and I congratulate Lyndon Terracini and his amazing team,” said Dr Handa.

The rise in attendance figures for the fourth year in a row shows Opera Australia’s mission to present opera to a broader audience is clearly working, with initial figures indicating that 47% of the audience were seeing an Opera Australia event for the first time.

All aspects of this year’s HOSH experience received great reviews. In particular, the hospitality options have evolved over the years to become a highlight of the event. For Aida the Moroccan themed décor and Fresh Catering’s deliciously inspired menus garnered praise across the board, matched perfectly by Tyrrell’s Wines. The Platinum Club was again a huge success, this year introducing a buffet option alongside fine dining.

Aida was acclaimed by critics as the most spectacular HOSH production to date and has been filmed for cinema, TV and DVD release. It will be released in Australian cinemas in August with a worldwide release scheduled in September (details www.cinemalive.com).

Details of Opera Australia’s 2016 season, including HOSH will be announced in August this year.