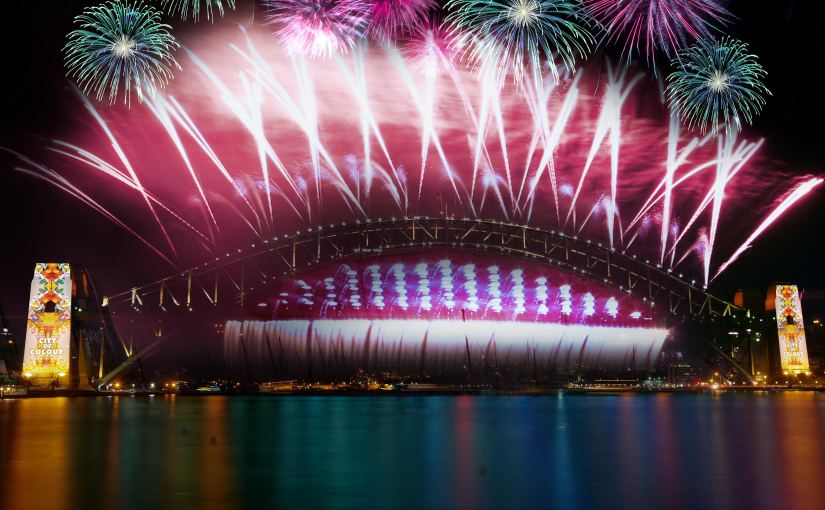 It has taken 2 years again but the revolution has arrived…

Every year, you hear it’s ‘bigger and better’ and most years the general public is like ‘they always say that and it’s still the same.’ The problem is is that it IS always getting bigger and better. Here’s a comparison:

The 2005 display was the 1st 12 minute display and it is still the same duration in 2015. Had the pylons and upper hangers been included in this year’s Midnight Fireworks, it would have been the 1st time in history that all parts of the Sydney Harbour Bridge have been used for pyrotechnics.

As you can see, the display has increased dramatically in size despite perceptions it is still the same as in 1988 (many people who witnessed the 1988 Australia Day display say nothing has yet to top it in size but after watching the footage, the display is actually ‘tiny’ compared to today’s standards). Goes to show how much Sydney Harbour fireworks have changed in 25 years! What would it be like in 25 years time? It is anyone’s guess!

2 years before 1988, in 1986, the Royal Australian Navy put on a fireworks display which saw the first usage of the Sydney Harbour Bridge for pyrotechnics. It was also the debut of the now iconic ‘golden waterfall’ effect. The Navy set the standard – a revolution – which became iconic & mainstream 2 years later in 1988 with the earlier-mentioned 1988 Australia Day display.

Fast forward to 2013 and the Royal Australian Navy raised the bar to extraordinary levels once again with the International Fleet Review Spectacular. Reviews of that display included that it was ‘different and better to NYE’ especially with the inclusion of a narrative. It was also the first combined pyrotechnic-projection-light-soundtrack show on Sydney Harbour. So again 2 years later, in 2015, we expected another revolution and it has now arrived.

The media (as well as the organisers) have been focusing on the Sydney Harbour Bridge’s increased pyrotechnic usage, which unfortunately is the story they produce each year so perception it will be the same will remain but it won’t be the same it will be better with the inclusion of a synchronised projection show (like during the International Fleet Review Spectacular) during the 9pm Family and Midnight Fireworks for the 1st time. The Sydney Opera House won’t be used for projections but the pylons will be so keep a close eye on them. It is expected the pylon projections will be of a kaleidoscopic nature (similar to this year’s logo) rather than detailing a narrative.

Other than the International Fleet Review Spectacular, only during Sydney NYE2008 – ‘Creation”s Acknowledgement Of Country ceremony, has Sydney NYE seen a combined projection/pyrotechnic/soundtrack show – photos of Australian landscapes were projected on the pylons as flares fired from the Bridge & barges to Geoffery Gurrumul Yunupingu’s song ‘Bapa’. A very moving, iconic and emotional display.

The Sydney NYE2008 – ‘Creation”s Acknowledgement Of Country ceremony will be outdone this year. Rhoda Roberts created the display in 2008 and she returns this year after a 4 year absence to create a very moving ‘Welcome To Country’ ceremony. As the Sydney Harbour Bridge pylons light up with projections, watch the Sydney Harbour Bridge turn into a giant Aboriginal flag through pyrotechnics including the first use of the hangers since 2003!

They have been used once in 2003 in spectacular fashion and are set for a possible rare encore. The hangers will see a ‘wall’ of fireworks shooting outwards onto the Harbour from the Bridge. They will first feature in the ‘Welcome To Country’ at 8:40pm as part of a massive pyrotechnic depiction of the Aboriginal flag before appearing in iconic style during the Midnight Fireworks!

This would be a real secret if this comes true but without a Bridge Effect this year, there is more chance than ever that we could see the return of the ‘stripy torrent’ waterfall of the 2004 event (see beginning of the video below). A multi-coloured waterfall has already been confirmed for the 9pm Family Fireworks (and hopefully it doesn’t fire like it did during the 2011 event when the purple section failed to fire though Photoshop soon fixed that).

It’s been done once before too in 2003 in the similarly themed and fashioned ‘City Of Light’ Sydney NYE event but this light show will run DURING the Midnight Fireworks rather than at the end creating probably the best party atmosphere ever to hit Sydney Harbour! All you need is that fireworks soundtrack to get the tunes pumping!

And last but not least, the most obvious reason –  this year’s display will have the most fireworks on the Sydney Harbour Bridge ever. For Australians, if you look at Channel Nine’s National Nine News, in the background you can see the fireworks on the catwalk on the Sydney Harbour Bridge and trust me, there is HEAPS more fireworks there than usual this year. Sure to be a cracker of a display (pun intended)!

…but now, in 2016, will it stay like this and will the traditional Bridge Effect return?