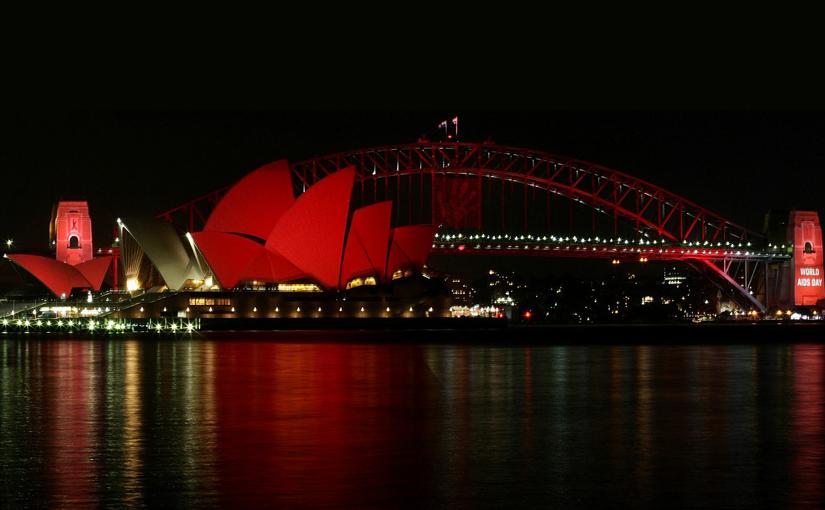 Despite all the downside over light rail construction affecting Sydney’s Chinese New Year Festival Twilight Parade over the coming years, there are plans to light the Sydney Harbour Bridge & several Circular Quay buildings red as part of Chinese New Year for the 1st time over the next 2 years.

In July this year, an artist impression of the City Of Sydney’s ‘Lunar Lanterns‘ element for the 2016 Festival was released. This element was designed to make up for the cancellation of the Twilight Parade next year. In the artist impression, it featured the Sydney Harbour Bridge lit red with fireworks seemingly coming off it’s upper arch.

Whilst the red lighting of the Sydney Harbour Bridge was confirmed at the end of September with the issue of a tender request, the City Of Sydney said “At this stage, we don’t currently have plans for a fireworks display off the top of the Bridge.” when enquiring about the pyrotechnic portions of the artist impression.

This year, a small fireworks display off Dawes Point was held to signal the start of the Chinese New Year Festival with a main fireworks display held in Cockle Bay at Darling Harbour to conclude the Twilight Parade a few days later.

The 2016 Chinese New Year Festival, which is to be held from Saturday 6 February to Sunday 21 February 2016, will celebrate the Year Of The Monkey. The launch of the Festival will occur later this month, where confirmation that the City is proceeding with the lighting of the Sydney Harbour Bridge & several Circular Quay buildings red is expected to be announced.